The project was created in 2012 with the idea of a faithful reconstruction of the Polish Army of first half 17th century. We renovated the military operation and hierarchy, but also the everyday affairs of different social classes of the time. Association faithfully portrays, in a reduced scale,  regiment under the command of fictional character Lukasz Bisiecki, whose bloodline is documented in Poland. The regiment includes units which actually served in the Polish-Lithunia army to faithfully portray her appearance. We all try to stick to historical sources and thus gear and equipment corresponds to the period and the unit. 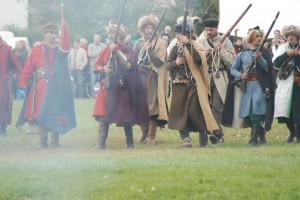 Lisowski regiment was founded in 1615, Alexander Lisowski, with the blessing of King Sigismund III., As a light cavalry regiment in order to conduct a guerrilla war on the territory of Russia. Lisowski, originally Hussar towaris, paid attention to fitness, while their discipline.Yet they were Lisowczycy known for his toughness, which not helped in the general awareness or the fact that did not set the amount of pay, but were fighting for loot. Soon after returning to Poland in 1616, dies Alexander Lisowski and appears traditions elected of colonel, directly subject to the king,by the officers. This act of of democracy, however, leaves a scar on the face of the regiment in the form of unequal perceptions of need to observe military discipline, deepening the poor relations of the regiment and the general public. On the other hand, it is worth mentioning,

It have often been labeled lisovky as other sections of looting troops. Thus, although they were good soldiers, saying naughty child is predestined to serve abroad and under the banner of the Habsburgs in the Thirty Years War. On his campaign among the troops of the Catholic League, they fought in our country, in Hungary, Germany, Lombardy and Flanders. Despite considerable military merit, whether at home in Poland or in the service of the Emperor, were by the Sejm in 1625 transferred to the service on a regular banners, which in fact meant the end of this regiment before returning home. But the fact remains that Lisowczycy appear in the western armys to the 30s of the 17th century and later in Poland.

Lisowski art of war consists in leading the fight from the saddle, whether cold or firearms, including assault and marauding activity, but also from ground as light or even a line infantry, which could be compared to the activity of dragoons or better Cossacks.

Cossacks in the Polish army

Cossacks were in the 17th century, unlike the in general common perception, famed for their infantry, no less than the cavalry. In the Thirty Years War was growing importance of lightweight reconnaissance and marauding troops, which were at the then in general lengthy and awkward movements of large armies very useful for harassing the enemy, disrupt his supply , as well as to sudden raids smaller military formations or to looting expeditions. Cossacks for this kind of fight perfectly match for his mobility, natural aggressiveness and strong armament which was often developmentally ahead of the conventional army. Many Cossacks lived in the inter war years in the wild borderlands between the Christian and Islamic world, where there was continual fights. 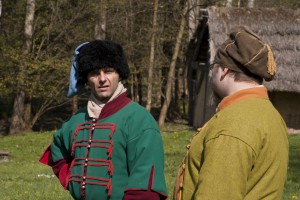 In the such an environment, the settlers become excellently shooters and even melee was not strange to them. In combat these personal qualities and experience apparently often have surpassed  western line infantry, recruiting from a simple population. Despite occasional Cossack uprising served a considerable amount of Cossacks in the Polish army, usually just in the role of light infantry or mounted warriors. In addition to the aforementioned exploration and marauding activity could in a regular battle field work as part of the line infantry, as well as free shooters.